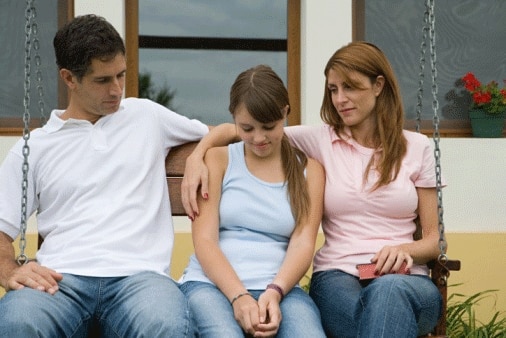 When you are faced with that heartbreaking task of telling your children your marriage is ending and a divorce will be following soon, it can be quite the challenge.

Even if the environment in the home was indicated that there was trouble (fighting, palpable awkwardness and animosity, and even one parent not living at home), it is a natural response to hold on to the small chance of hope that things would work out.

You can ease some of that pain your children will probably feel by using some of these tips when you are about to break the news.

Create a united front. Both parents should be present when you are going to talk to your children about the plans to divorce. You will want to explain the situation to your children and make sure you aren’t pointing any fingers by saying your mother/father wants a divorce. Instead, say “we” as much as you can when talking about this decision.

Talk to the whole family. It’s a good idea that instead of talking to each child individually, you should break the news as a family. This will provide a source of comfort for the children and will help them feel less like it is “their fault.” Of course, after the family meeting, you can follow up with each child individually so that they can say whatever they need to or answer any questions.

Plan the things you are going to say. When you are going to be discussing such a big topic, it would be a good idea to have an idea of what you want to say before going in. You don’t want to be stammering or glossing over some things. It is important that both people are communicating with the children and touching on the important stuff like:
• The divorce is not the children’s fault.
• You both love them very much, and that will never change.
• One parent may not live with them anymore, they are still their parent and are there for them.

Expect different reactions. Children will surprise you when you tell them that you and your spouse are divorcing. Some children may lash out and have a breakdown while others will act like you told them it’s raining outside. If your child asks if they have to switch schools or stop going to soccer games, it isn’t because they don’t care about what you’ve just told them, it’s because they need to know how this decision affects them right at this moment.

Be able to answer questions. It will probably take your children some time to process the news. Sometimes they will withdraw and be alone, which is perfectly fine. They will come to you when they are ready to talk. When they do, you should be able and willing to answer any questions they may have. The idea here is to keep them in the loop and informed about what is going on, and you can better tend to their concerns. You should be honest and forthright; and if there are some details (like infidelity) that you feel they don’t need to know about, tell them they don’t need to know certain things. They’ll have to respect your decision.