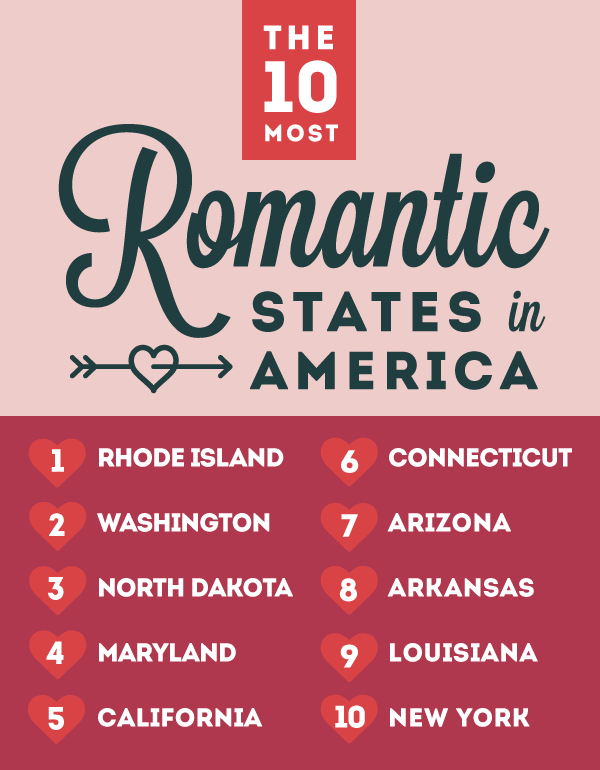 Looking for love is a challenge, especially if it feels like you’re looking in the wrong places. What happens when you do find someone you may want to date, but it falls short in the romance department? What’s more depressing is what are you supposed to do if it feels like every person you meet lacks the ability to be romantic?

We took to the internet and conducted a survey of over 500,000 people where we asked them if they thought they were romantic.

Among all those who were surveyed, people who lived in Delaware believe they are the most romantic. Actually, people in the north eastern part of the country (Pennsylvania, New York, New Jersey, and Connecticut) feel pretty passionately about romance, as these five states broke the top 10. Other highly romantic states include Virginia, California, Alaska and Louisiana. Sadly, if you reside in the Midwest, you may find there is little romance to be had. Less than 31% of South Dakota residents believe they are romantic, which is pretty abysmal in comparison.

Where you live isn’t the only deciding factor when it comes to how romantic someone is. There tends to be a line drawn between men and women, as men (especially men over 50) generally believe they are more romantic than women. Interestingly, age plays a deciding factor as well, as senior singles who are over a particular age tend to believe they are more romantic than their younger counterparts (people under 50 years old).

Now you should keep in mind that 500,000 people is a lot, but it doesn’t necessarily mean you need to pack up and leave South Dakota and move to California just to find love. Perhaps your partner just needs some encouragement so that they feel some kind of romantic inclination.

Or, maybe what they think is romantic may actually be a little creepy. For example, if you were to go out on a first date and things go really well, when the night comes to an end, perhaps an “I love you” slips out. We asked 120,000 people if they would think this would be romantic or scary, we were surprised by the answers. Again, men and women see this situation quite differently.

According to the guys, 1 in 5 of the men would believe that “I love you” on a first date is a romantic thing. Which is an interesting discovery considering men tend to shy away from those three words until later on. Women, who are generally more in touch with their emotions and aren’t afraid to let them show, felt that by saying, “I love you” on the first date is on the creepy side of the scale. A staggering 54% of all women asked said that it is scary and they’d be running away ASAP.

The main thing to be taken away is that young or old, male or female, romance is subjective and it is alive and well in America (except for South Dakota, it seems). All you really need is a bit of patience and putting yourself in a position to meet eligible singles near you, and you’ll be drowning in romance once you find that person.