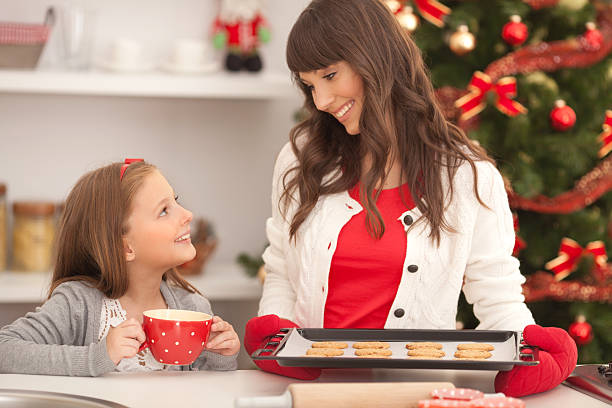 As a mother, we look forward to waking up early in the morning to our children who are pleading with us to open their Christmas gifts. We love seeing their cheerful expressions when they get that one gift that trumps all others and they think you (or Santa depending on how old they are) are the best. Then after gift giving is over, you make a nice breakfast and then everyone either goes back to bed for a little bit or they spend the rest of the morning playing with their new gadgets, gizmos, and other fascinating things.

This year… This is the first year that you find yourself either spending Christmas alone or you are forced to split the day with your kids father. It’s the right thing to do, but it doesn’t make it any easier. In fact, it makes it so much more difficult.

We’ve compiled of needless traditions that are usually fun during Christmas, but now that you aren’t feeling quite in the holiday spirit, they will probably feel tedious and maybe even make you sadder.

Whoever thought it would be cute to have an elf doll get into mischief during the night while your children sleep maybe the twisted individual alive. Okay, maybe it isn’t that bad, but it isn’t as fun as you may think it is because now you are tasked with having to try and come up with new and creative acts of mischief or clever little antics to put the elf in each night of the week. Yes, in the beginning it is fun and you are brimming with ideas, but as the month wears on, you run out of ideas pretty quickly. Not only that, but if you do this little game for several years… Well… You’ll be “borrowing” ideas from other parents who are way more creative.

In theory, having holiday themed activities and events for the kids at school is a great idea. It helps the kids celebrate the holiday and be creative. However, it can be tedious and costly if you participate in every activity. Sure, no one wants their children to be the odd kid whose mom doesn’t send in handmade cookies for the Christmas party, but think about it… If you’re single and you’re doing it on your own, when do you have the time to bake? Just buy a box premade cupcakes and go about your way. Hey, at least they have something to contribute. Besides, hardly anyone appreciates the extra bit of edible glitter on the Grinch’s heart as they gobble them down anyway.

You already know that you are an incredible mother and you don’t need anyone else to validate this fact. So you may feel like you have to avoid social media for the rest of the month, because there are attention starved mothers who go all out and try to prove to the world that they are living the perfect life.

Now we aren’t saying that you shouldn’t take family pictures with your children and share it on social media, but you shouldn’t pick apart the things you do or post because no one can tell you what you are doing is right or wrong.

As your first holiday alone, you may feel the pressure of having to make sure everything goes smoothly and that your children have a happy holiday like they are used to. It’s a nice thought and you want to maintain as much tradition as you can, but the truth of the matter is, the holidays aren’t going to be the same and your kids will take notice of this. You’ll find out that your kids are more understanding and perceptive than you think. So, instead of fretting this year, simply do you. If you want to take it easy this Christmas, go for it. When your kids ask why you let them sleep in late, placate them and say you felt like they deserved a little extra sleep. When they are off with their father, take this as a gift from him to you and relax. You, my dear, deserve it.